skip to main | skip to sidebar

So I'm looking at buying a fancy pants weigh scale online (as I've discovered shopping for things in my granny panties is one of life's greatest pleasures) one of those ones that can measure your water mass, bone mass, fat... And apparently laziness as some of the reviewed cons listed were "you have to push a button to turn it on". Now folks don't get me wrong- I love all y'all- but if you are too lazy to PUSH A BUTTON to even weigh your chub- you've got bigger problems then any scale can help you with... Amiright??

That aside- worked out with Andrea tonight- she made me sweat!! But I held a plank for 20 seconds and even did ten push ups with Huxley laying on my back. Best compliment- "you've got great quads"!!!

In other non weight loss news- I laughed so hard today at work I snorted. Loud. I love being able to work alongside my friends. Don't think you can put a wage on that? 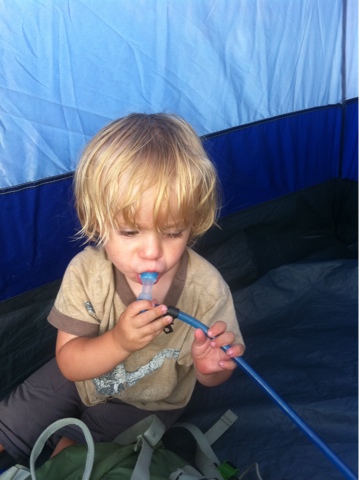 Posted by Herselftheelf at 11:25 PM No comments:

Just a girl and her fat ass trying to make it in this crazy world...

So ran again tonight. My friend from work came with H and I. I ran the whole way up Connors Hill. Without stopping. I just wanted to say that. That is all.

Ps. Here is a photo of my current foods (inspired by and garden vegetables compliments of the lovely Laura):
Breakfast- Greek yogurt with "Skinny B" cereal and fresh blueberries for breakfast, and Mexican chicken (cilantro, tomato, onion, garlic and a small tomato blended) with tomatoes, spinach and roasted asparagus for supper!
Also: my friends have a beautiful baby girl- look at that face and try not to smile :) 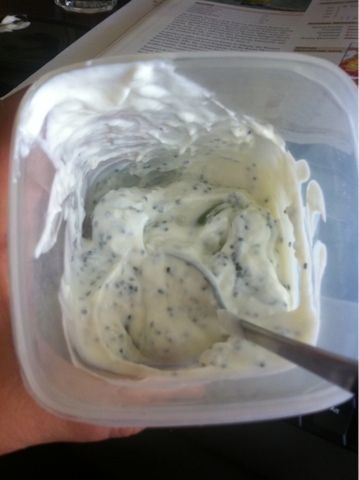 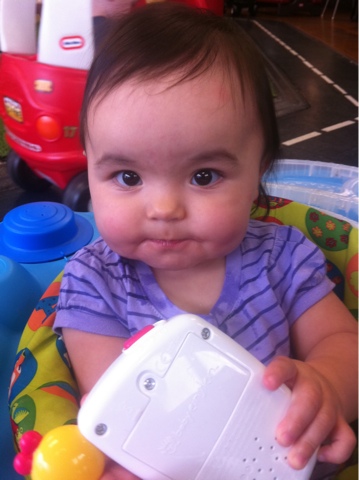 Posted by Herselftheelf at 10:55 PM No comments:

This doesn't hurt. Cancer does.

So a lot has happened in the past couple of years I have neglected this site. It's like my Christmas cactus my mom keeps wondering about. It doesn't grow because I don't pay attention to it! But I saw a t-shirt in a running room propoganda I picked up the other day for inspiration and it prompted me to write. It said "This doesn't hurt. Cancer does". And I knew exactly what that menat. And I think I might just have to get one of those made for me.

I have had a lot of stuff go on in the past while. My father passing was a huge blow to myself personally, on the family level and my entire being. I have had a baby, broke my leg and almost ripped my foot off, recouped from that- can walk again, moved to Medicine Hat, moved back, struggled through a crippling post partum depression (none of that is in a chronological order). After many drowned sorrows in cupcakes, tears and Storage Wars I am feeling like I am back again. I attribute a lot of it to my steadfast partner Shawn, who has put up with my craziness and outbursts of uncontrolled grief for the past two years. He is my rock and although the boat hasn't always been steady- I have never doubted his love and his in me. And he has never left my side.

I can also give some credit to my beautiful personal trainer Andrea, who despite me asking for it, never has yelled at me once! I am FINALLY running again. Finally. And it feels good. I went while on my work camping trip in the mountains and as I came up over one hill pushing the stoller singing the ABCs for H I realized I hadn't felt that alive and happy in years. Literally. Years. I went last night with Shawn, Huckleberry and my two wonderful fur babies in the ravine by our house and for the first time didn't feel like I was going to die. I ran all the way up the hill and didn't stop once. And I don't think it's just my new Nikes. I am actually going to get the balls to sign up for the 10km on September 22 with my two friends and I think I'll actually survive. My cousins in Thunder Bay are running on on that day as well and so I feel a bit of a connection to them in that way and so plans are in the works to sign us all up one to run together. I've said it before and I'll say it again; Derkson women are beautiful.
Posted by Herselftheelf at 2:33 PM No comments: